At least 3 people were killed in the Tuesday night crash

A fatal, 14-vehicle pileup that killed at least three people and left Highway 400 about an hour north of Toronto littered with “tangled, twisted metal” may have been caused by an inattentive transport truck driver, police said Wednesday.

The chain reaction of collisions started around 11:30 p.m. ET Tuesday, when a transport truck slammed into the back of another large truck that was stopped at the end of a long line of traffic in the northbound lanes. Two fully loaded tanker trucks, three other commercial vehicles and multiple cars were involved in the crash that ensued.

Early indications are that “potentially, an inattentive vehicle — potentially a fuel tanker approaching northbound to slow or stopped traffic, smashed into the back of the queued traffic,” Schmidt said. 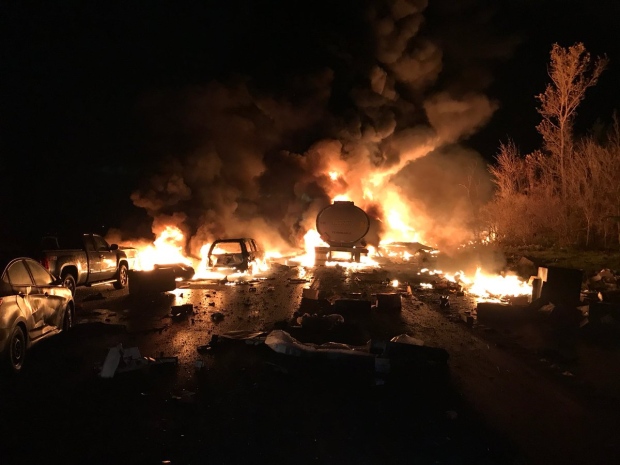 At least 14 vehicles were involved in the deadly collision late Tuesday on Highway 400 about an hour from downtown Toronto. (Kerry Schmidt/Twitter)

The tanker trucks essentially acted as “bombs on wheels,” he continued.

The three people who were killed have not been identified by police. Multiple other people were sent to hospital with non-life-threatening injuries.

Last week, OPP commissioner J.V.N. (Vince) Hawkes warned that an increasing number of fatal collisions are being caused by distracted, tired or otherwise inattentive transport truck drivers. Between Jan. 1 and Oct. 15 of this year there have been more than 5,000 transport truck-related collisions, Hawkes noted. A total of 67 people have died in 56 collisions involving transport trucks so far in 2017, he said. Those numbers don’t include the fatalities resulting from this accident.

On Wednesday afternoon, Hawkes repeated his message about distracted driving, saying that it was a miracle that more people weren’t killed.

“There’s really no excuse for that truck to continue down the highway at the speed that they did,” he said.

The stretch of Highway 400 between Highways 88 and 89, near Cookstown, Ont., remains closed in both directions and will likely not reopen until Thursday morning. Schmidt said the sheer devastation of the scene is making it difficult for investigators to do their work.

He said first responders thought it looked “almost like Armageddon.”

At least two dead on Hwy 400. They have not been able to look inside all vehicles. Some vehicles have been reduced to burnt metal frames. pic.twitter.com/cfpTiTdg7p

“It’s something I have never seen in my life … absolutely catastrophic. Twisted, tangled metal, unrecognizable debris and sadly deceased people in those vehicles as we speak,” he told reporters from the crash site. He added that the coroner will need help from the victims’ next of kin to identify their remains.

“We are working with coroners and forensics to first get into the vehicles to find out what sort of remains are there, if any. We are not sure what is inside,” said Schmidt.

About 40 minutes before the pileup, another three-car collision had slowed traffic on Highway 400 northbound. A driver involved in that incident has been charged with drinking and driving. Police and other emergency services who responded to the earlier collision were still at the crash scene when the pileup started about one kilometre down the road in the northbound lanes.

Robert Bianchi passed the first crash as he drove southbound down Highway 400. A few hundred metres after that , he saw a “huge” explosion. “I’m still shaking. I can’t believe what I saw,” he told CBC Toronto. “So I just stepped on my brakes because I didn’t want to pass by that fire.”

Other drivers who stopped near the crash site ran from their vehicles as the blaze intensified, Bianchi added. Highway 400 is closed in both directions from Highway 88 to Highway 89 on Wednesday. (Tony Smyth/CBC)

Vincent Di Pinto, another witness, had just left work at York University and was headed north on the highway when he saw “a large transport slam nose-first” into the back of another large truck that was transporting cars.

“Basically the second vehicle, the white transport, had literally rode right up the vehicle transport,” he said.

“After that I heard some popping sounds, and then a loud explosion … I got out and looked and it was just explosions, one explosion after another and orange flames that were starting to go up into the sky.”

Di Pinto ended up speaking with the driver of one of the trucks involved. He said the driver seemed OK, but he was complaining about ear pain and seemed to be struggling to keep his balance.

“My understanding is by speaking to the driver of the diesel fuel vehicle that it was laden with fuel and it was just flames shooting out maybe 200 or 300-plus feet in the air,” he said.

The fire burned for nearly three hours before it was extinguished shortly after 2 a.m. by dozens of firefighters from eight different local services.

Schmidt said Wednesday afternoon that investigators have determined molten aluminum has been leaking across the roadway, causing such severe damage that parts of it will have to repaved. There was also a significant spill of fuel that has leached down into the fields enveloping the highway.

Police said emergency crews were also dealing with a significant spill of fuel that will take some time to clean up. (Tony Smyth/CBC)

Schmidt told CBC Toronto that investigators will consider human and environmental factors in trying to determine what caused the chain reaction crash. It appears, however, that conditions were fair when the first trucks collided.

The OPP is asking anyone who may have witnessed the crash to call its Aurora detachment with any information. Multiple witnesses told CBC Toronto that the initial collision was followed by a series of ‘explosions’ that sent drivers running. (Kerry Schmidt/Twitter)