Man arrested after driving past police barricade on Highway 401

A man has been arrested after driving past a police barricade blocking the scene of a collision in Mississauga.

The westbound lanes of Highway 401 have been closed at Mavis Road since approximately 1 a.m. on Monday, when a truck rolled over, blocking several lanes. 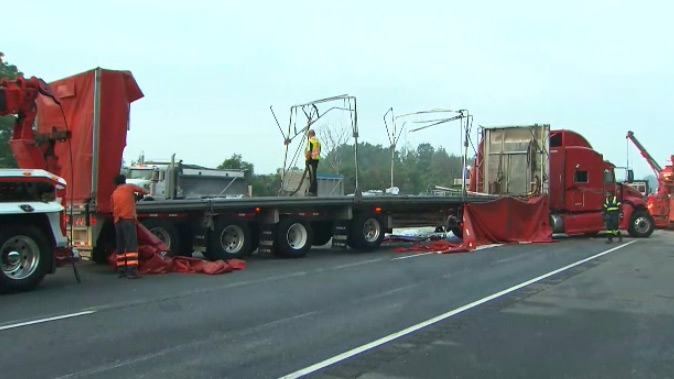 The truck was carrying a load of industrial glass, which spilled into the lanes. The closure lasted until shortly after 8 a.m.

Following the crash, police set up a barricade in the area, and were directing vehicles off the road, when a man in a van drove past the barricade at approximately 5:30 a.m. The van pulled up next to a group of emergency vehicles, and an officer on scene ran over to speak with the driver.

Reporters on scene then saw the van start to move forward. A man fell out of the driver’s side door, and the van slowly rolled into a ditch on the side of the highway. The man was then tackled to the ground by several police.

The driver has been charged with careless driving and driving on a closed highway.

Photos from the scene taken by viewer Andrew Hussey, submitted via MyNews.CTVNews.ca.