One type of staged collision called the “swoop and squat” involves scammers pulling in front of an innocent driver, then slamming on their brakes to ensure the driver doesn’t have enough time to stop. This makes it appear like the innocent driver is at fault. (Robert Crum/Shutterstock)

“We’ve seen a definite increase in identity theft within the medical clinics with regard to claiming accident benefits,” said Rick Dubin, vice-president of the Insurance Bureau of Canada’s investigative services.

Dubin leads a group of 50 investigators who focus on probing organized auto-insurance crime for private insurers across the country. At any time, they are working on dozens of alleged staged collisions.

Oftentimes, the phoney crash is just the “catalyst” for a larger scam that gets the so-called victims into the doors of compromised rehab centres and medical clinics.

“This is where the real money is,” said Dubin. “And this is where it’s had a very serious impact in terms of the payouts by insurers, which again is passed on to the innocent customer.”

In some cases, he says, owners or employees of medical clinics or rehab facilities are becoming involved in these fraud rings.

They forge the signatures of real doctors or chiropractors, without their knowledge, to cash in on the resulting treatments for the faked whiplash and soft-tissue claims that result from the staged collisions.

Ontario experiences the largest number of what are called induced crashes, particularly in the Greater Toronto Area, which Dubin calls the “staged collision capital of Canada.”

The insurance bureau says British Columbia also experiences a number of these fraudulent crashes, though not nearly as many.

Manitoba’s public auto insurer says it’s a known problem there as well, but not one they track.

“It’s very difficult for us to put a number on it. Is there a hundred a year, is there 200 a year? We don’t know,” said media relations coordinator Brian Smiley of Manitoba Public Insurance.

“We do know they exist because we have had occasion where people have been charged and convicted.”

Last month, one of Britain’s biggest auto insurers, Aviva, revealed that the number of “induced accidents” rose by 51 per cent in 2013 and called for harsher penalties on perpetrators.

However, here in Canada, none of the top private auto insurers were willing or able to provide figures on staged crashes.

Aviva and State Farm’s Canadian companies said they don’t monitor the problem here. TD Insurance doesn’t publish the data, while Intact was reluctant to provide figures because it doesn’t represent the whole industry.

‘Hopefully, as the courts get more educated in this type of illegal activity, they’ll get tougher to create a stronger deterrent.’– IBC’s Rick Dubin

However, a 2012 report by KPMG estimated that auto insurance fraud in Ontario costs insurers up to $1.6 billion a year, and accounts as much as 18 per cent of total claims.

In the past five years, there have been several large staged-crash rings uncovered in Canada, groups that racked up millions of dollars in fraudulent insurance claims.

The scammers bought used luxury vehicles cheaply, then rolled back their odometers to increase the value. Then they orchestrated thefts of the vehicles or used them in fake accidents.

At least three massive rings have been unearthed in the Toronto area in the past few years, with each involving dozens of people.

In the past, punishment for the crime was often light, with judges doling out community service and house arrest, but the courts appear to have increased sentencing in recent years. 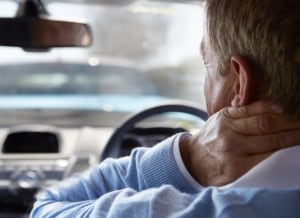 Signs of a scam include vehicles filled to capacity and all occupants claiming whiplash or other soft-tissue injuries. (Shutterstock)

The ringleader of a Toronto scam received 3.5 years in prison after a 2010 probe, while the Manitoba mastermind netted a four-year sentence last year.

“Hopefully, as the courts get more educated in this type of illegal activity, they’ll get tougher, to create a stronger deterrent for these types of individuals,” said Dubin.

Organized crime is often involved in these types of insurance fraud, some of which are getting more and more sophisticated.

One $4-million scam in the Toronto area resulted in hundreds of thousands of dollars in fines for four clinics that created false invoices.

Another recent auto-insurance fraud operation in York Region involved those working in the medical and legal professions. That case involves suspected identity theft at rehab centres across the greater Toronto area, says Dubin.

In the U.S., staged accident rings cost insurers billions of dollars for phantom injuries, according to the Coalition Against Insurance Fraud.

Two years ago, the FBI arrested 36 people in New York – including 10 doctors and three lawyers — for their alleged involvement in a $279-million auto insurance fraud, believed to be the largest ever of its kind for the state.

The U.S. Attorney Preet Bharara called it a “colossal criminal trifecta” with tentacles reaching into the medical, legal and insurance systems.

The alleged ring even operated its own chain of medical clinics and had ambulance chasers convincing real car-crash victims to seek unnecessary care at corrupt clinics in exchange for kickbacks.

One of the dangers of crash scams, in which fraudsters stage accidents for the insurance benefits, is that innocent drivers can get caught up in the scheme.

Scammers want the crash to look legitimate, so they will make it appear that other drivers are at fault.

There are numerous types of scams, all colourfully named but simple in their deception.

A “swoop and squat” involves the scammer quickly pulling his vehicle in front of an innocent motorist, then slamming on his brakes, ensuring the following driver doesn’t have time to stop.

A “drive down” takes place in a parking lot. The fraudster waves an innocent driver to back out of a parking spot, then intentionally drives into them. Then the innocent driver is blamed for backing into on-coming traffic.

In a “left-turn bullet,” an innocent driver is waiting to make a left-hand turn. The scammer approaches, waves at the driver to go, then intentionally drives into the vehicle.

While those are the most common scams, “organized crime, unfortunately, is very creative,” says Dubin. “They keep changing their approach over time.”

The big problem, though, is that “innocent drivers are put in very dangerous positions,” said Dubin.

In the U.S., there have also been fatalities, including a grandmother who died in a Massachusetts setup crash.

‘Red flags’ of a scam

There are a few telltale signs of a scam-in-progress that drivers can look for, says the auto fraud investigator.

The crashes almost always happen at low speeds and result in minor or no damage to the innocent motorist’s car. The suspected fraudster’s vehicle is old or a rental car. A tow-truck operator just happens to drive by the accident, then suggest a specific body-shop for your car’s repairs.

Tow-truck drivers can be part of the scheme; so, too, can the body shop. “There’s kickbacks in this whole service supplier chain,” said Dubin.

Often scammers will call an ambulance to the crash site to make it seem as legitimate as possible.

An inconsistent explanation by the car’s occupants about where they are coming from and how the accident took place can also be a sign.

A full vehicle is also a giveaway, especially if all four occupants claim soft-tissue injuries that are difficult to medically disprove. Fraudsters often load up the vehicle to maximize the medical benefits reaped down the road.

Dubin recommends calling the police and insisting they come to the scene of the collision if a driver suspects a fraudulent crash. Also, the driver should call their insurance company and ask for a recommended body shop.