Sgt. Darrin Turnbull had just pulled over a speeding vehicle and was talking with the driver when he noticed a cardboard box wriggling in the back seat.

He asked the driver what was inside, expecting the answer to be puppies or some other small animal.

Then he heard a voice call from the back: “I am.” 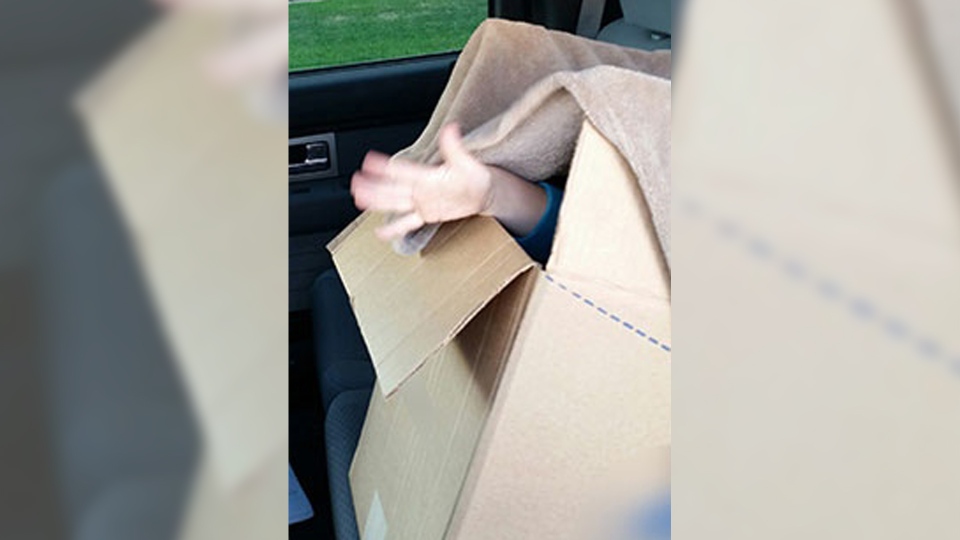 Police say the boy stuck his hand out of the box and waved when the officer asked what was in the container.

And out popped a little hand that started waving.

“I was shocked,” says the RCMP traffic officer.

“The driver told me the child had refused to stay in the child seat and wanted to play in the box.”

Turnbull wouldn’t reveal more details about the Tuesday traffic stop in Airdrie, north of Calgary, including the age of the preschooler or if the driver was his parent.

Children often fight getting into their car seats, he says, but they have to be strapped in.

“It is the adult who needs to make adult decisions when it comes to safety — not the child.”

Turnbull remembers that when he was a child, he used to ride in the back of his father’s station wagon. But times have changed.

“We have all these advancements in road safety and engineering to keep children safe.”
The officer says he was able to coax the boy into his seat and warned him about being safe.

He handed the driver a $167 speeding ticket and a summons requiring a court appearance on a charge of failing to properly secure a child in a motor vehicle.

It will be up to the driver to explain to a judge why the child was allowed to ride in the box, he says.